We still couldn’t believe it, we had made it all the way up the 11 miles to the top of the highest summit in the contiguous United States and the Sierra Nevada, standing at 14,505 feet.

Kunaal and I rested at the top for 45 minutes chatting with the other hikers and signed the book.

He shared with me that Skanda hiked most of the way up with him and was encouraged by Skanda’s company. See below for his account of the hike up.

“The switchbacks went back and forth and all I could think about was trying to make it to Trail Crest. This is when I met Skanda and we were both very encouraged and thankful for each other’s company and silent support. I physically felt okay, but I had to keep reminding myself to breath and drink water. Just the idea of knowing someone was there behind me, kept me mentally motivated and moving forward and reminded me to keep a slower pace. Especially because he was also struggling a bit so I felt I had to be strong and positive as Jessica was to me the day earlier. Also, the fact he had been hiking since midnight and started at Whitney Portal, while I was just a few hours in from trail camp. He did everything we did yesterday and was still going. He is doing much more then I am, so I should be able to do this. Being a person that usually thinks of others before myself that also kept me distracted from my thoughts (what if I can’t do it, if I don’t do it what will I say to people, Liyah (his dog) wouldn’t care, she would be excited to see me anyway. Skanda also kept giving me ginger chews and that helped by giving me something to do and a mental placebo that this would help me hike better. A little after passing the JMT junction is when we sort of had this unspoken moment that I needed to keep my pace to make it, so I continued on ahead of him. The last stretch was hard and I kept picturing Liyah looking back at me as she does on our regular hikes when she is waiting for me. I was fighting tears saying ‘Kunaal you can do it, you’re almost there.’ Words cannot describe how I felt when I got to the top. It was a huge emotional and physical accomplishment.”

The summit was warmer then I had expected, but sitting on any of the rocks quickly sucked the heat from my body and there was a slight wind blowing. After one more snack of a Cuties Mandarin, we decided to start the 11 mile trek down. Skanda, Kunaal, and I hiked together along the back of the needles a little ways behind Ivo and Christine. Here is a picture of us taken by Christine. 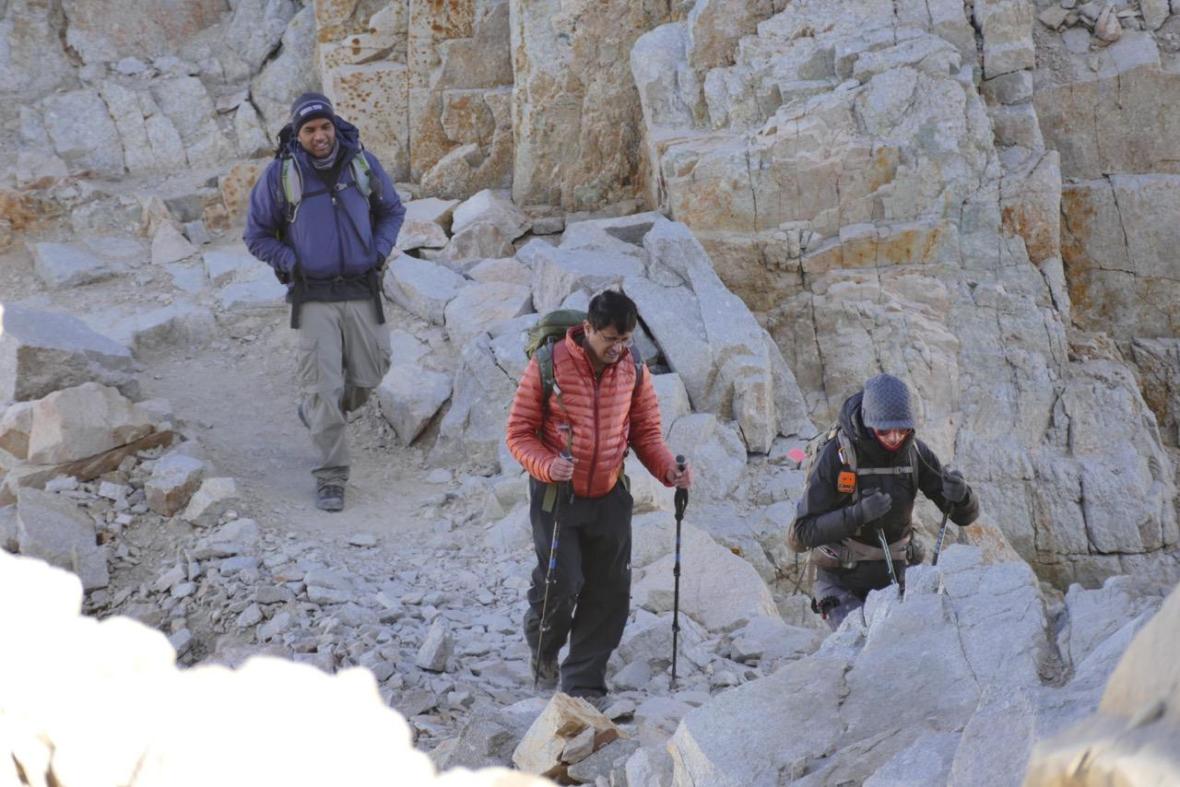 This picture is the backside view of the needles hiking back toward Trail Crest.

*Kinda explicit moment of the trip* Along the edge of the needles there are very few hidden places to go to the bathroom and the trail had cliffs on both sides, one going up and one going down. At one point I had waited too long, my bladder was so full, and I knew the second I stopped moving, I’d have to drop my pants and go. Kunaal was too far ahead of me to ask him to have people wait ahead so I could go in a small curve blocked by rocks and Skanda was too far behind for me to stop and wait for him to pass. I picked up my pace to try to give myself enough time to go before Skanda would come around a corner. I finally rounded a corner that I knew I only had maybe 10 seconds that I was positive to being alone. I dropped my pants, right on the trail and leaned against a rock anxiously watching the corner and listening intently for footsteps. Then I heard the footsteps and panicked. I pulled my pants up but the flow did not stop for another few second. Thankfully it didn’t go through all my layers, but now I have a funny story and can officially say that I peed my pants on Mount Whitney.

Here I am standing next to the Sequoia National Park sign which is near Trail Crest. Thank you Christine for getting such a fantastic shot! Kunaal waited for me here before continuing on down the dreaded 99 switchbacks. I continued on very slowly with Ivo and Christine step by step went down the switchbacks. Their company and our conversation helped distract me from the steep decline and keep my mind off the time. I got to hear all about the different places they have traveled and what they suggest if I were to travel to those places. We talked about food and adventures. I felt like they were true kindred spirits and a comfort to me down this hard section. 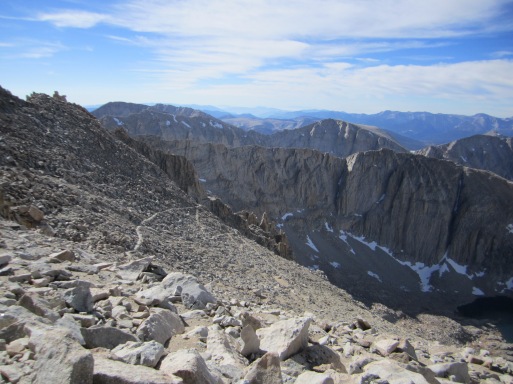 Kunaal was far ahead of me and had our stuff at Trail Camp packed up by the time I got there. Here we are all packed up after a little break at Trail Camp and ready to head down the rest of the mountain. Still high spirits but getting a little sore.

Kunaal was much faster then me hiking down. Here he is ahead of me on the trail. I know he was sore too, but very driven to get down.

The views on the way down were gorgeous and new as we couldn’t see it the previous day because some of it was dark. Gradually with each mile, it became more and more of a mental battle to take the next step. Other then a few times for quick breaks, I did not hike with Kunaal the whole way down.

I love hiking alone, I’m all for it, so normally I would have been fine. The progress of my thoughts were really interesting to pay attention to. I kept examining how I was doing. I’d notice what physically hurt, how my mental state was, how I was feeling emotionally, etc. 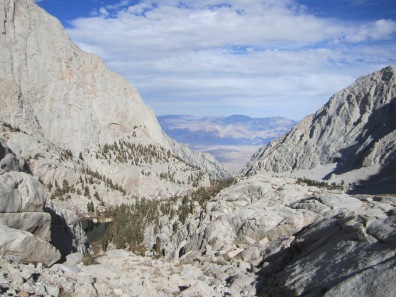 My knees were hurting from the constant decline, but I expected that and the hiking poles helped cushion them. My right trap muscle had a pinch in it, but that was also normal from the backpack. I just used the yoga method and breathed deeply into the pain. The one pain that gradually got worse and worse and worse was my feet. Coming from a job that I sit at a desk 9-5 M-F and only preparing for this trip for 2 weeks, this SHOULD have been expected but it caught me by surprise.

Being on my feet for over 10 hours at this point starting to wear on me. It got to the point that every step hurt, like I was stepping on Legos.

I went from feeling confident, to questioning why I didn’t consider this issue, to getting frustrated for not planning better, to angry that I was alone and not down yet. I went from telling myself I was fine to the point of tears coming down my face and calling ahead HOPING that Kunaal could hear me, but he was too far ahead. I just needed support at that point. Just someone to walk with me and to keep me company and distracted, but no one was there. I cried out in pain and frustration. I knew that stopping wouldn’t help and I would have to continue on. I couldn’t think of anything else but pulling my leg up and stepping it forward and then again and again. Over and over. The shooting, sharp pain in the bottom of my feet was terrible. 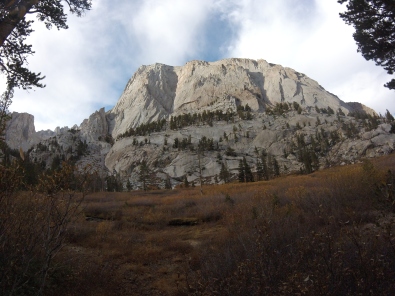 Ivo and Christine took a break at Trail Camp and at this point caught up to me as the tears began to come down my face. I quickly wiped them off and was thankful for my sunglasses. As they quickly passed, I asked them to please tell Kunaal up ahead to wait for me. I was going so slowly that eventually Skanda caught up to me and I was so thankful to have him nearby. I felt like we were two old friends in a convalescent home trying to walk down the hall with our canes as we extremely-gingerly made our way down the trail. I complimented him for getting this far and telling him how much I admired him for doing it in one day! He stopped and I ended up hiking ahead of him after checking that he was doing okay.

I was in so much pain at this point, I was dragging myself along more than I was hiking. I kept hoping that I would see Kunaal, but at this point, he was already down the mountain. Ivo and Christine were able to meet up with him and let him know I was struggling. I began to cross the bridges and streams that I remembered crossing in the dark. I was in the last 2 mile stretch. I kept asking myself, “Where is Kunaal? Why isn’t he here? Why isn’t he waiting for me?” I was not thinking clear and was in more of a panic state then a calm, confident state. It was starting to get dark, the sun had gone behind the mountains.

Then I looked ahead and I saw Kunaal. He had left his pack at his car and hiked back up the last mile. It was exactly what I needed. I needed him to just be there to be supportive and walk with me. I pushed through the last mile and was so thankful to make it back to the car and thankful for his company.

We put everything in the back of his 4Runner and I took off my boots and put on my flip-flops. Such a good feeling! We did it! We celebrated with a dinner at Jack in the Box and then headed home.

What an unforgettable experience! Headed out of my home with a stranger and came back with a new best friend! Thank you Kunaal for the adventure! Now let’s go to backpack Rim to Rim in the Grand Canyon!

See below for the SPOT tracking of the hike from Mt. Whitney to Trail Camp.